The development history of forklift can be traced back to nearly a century, and many interesting models are shown. Of course, the main determinant factor is the economy: every time the rapid demand for forklift trucks and the increase in production are due to the demand for industrial production, which also stimulates technological innovation. The impact of political events cannot be underestimated. The most typical examples are World War I and World War II. Another well-known fact is the investment in specific under. For example, the planned economic investment made by Marshall to revive the European economy after World War II led to the rise of certain companies – as well as manufacturers of long-standing handling equipment.

Similarly, the most obvious is the impact of technological innovation on economic growth. The wide use of forklift reduces the proportion of manual labor in the production and storage process. Each time has a positive impact on the growth of labor productivity and the increase of commodity output. Therefore, the development of forklift itself has become a factor in the gradual economic development. 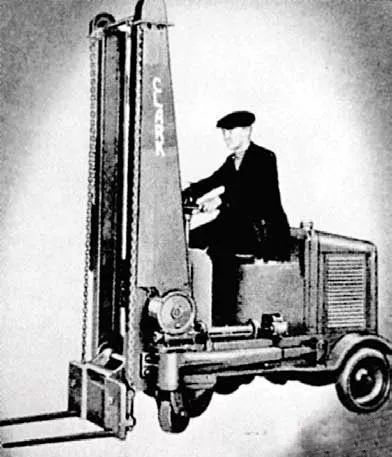 The first Clark loader in 1917

In fact, the history of this unique worker – from his birth to today – can be divided into several stages. The first has to do with the economic prosperity of the United States. Rather, it has to do with the emergence of the first industrial company in the United States. It was here, in the early 20th century, that a large-scale automobile industry (one of the main ideas of loader designers) emerged. The rapid development of aviation industry and the establishment of railway network, in turn, brought about the economic development of the city.

The development of the seaport has also become a strong driver for forklift manufacturers, as it promotes the accumulation of experience in the design of cranes, winches and similar machines. Not surprisingly, it was the Americans who drove forklifts. The first models were developed from companies like Clark, Baker, Hester and Yale; so far, some of them have had a significant impact on the formation of the flooring equipment market and identified their development priorities.

The main reasons for the emergence of the first loader were the increase in production and the need to handle a large number of heavy loads at the same time. The direct predecessor of the industrial forklift was a machine used to transport sand and raw castings. The machine was created by a group of workers in the foundry of Clark equipment company. In 1916-1917, in fact, until the 1940s, the United States was still a geographic center for forklift manufacturing. In Europe, loaders are mainly imported from the United States, or manufactured under the license of the United States. Although European companies, such as famous steam locomotives, cranes and moving machinery manufacturers Ransomes, tried to build their own forklifts. 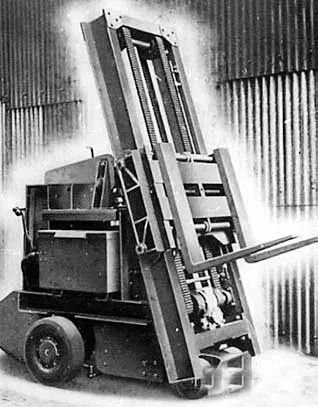 As mentioned above, the next reference point in forklift history is World War I. Army officers saw the ideal tool for Transporting Explosives with electric tricycle loaders. As is known to all, the inventor of the loader (Eugene B. Clark) received a priority order from the army for the manufacture of three wheel loaders. Clark assigned a separate production line and built the entire plant.

For Baker, an electric car manufacturer, the company launched the first electric forklift in 1920. World War I was a period of economic stagnation, where production was suspended due to a lack of raw materials. As a result, in Europe, the first locally produced forklift didn’t start mass production until 1923. The first information about the electric forklift came with the launch of the kf202 model, which has a lifting capacity of 2 tons (“K” stands for “King”, “F” (United Kingdom) – “France”). The forklift was developed by Yale forklift of North American Mining Group. But since 1923, Fenwick in France has been licensed to produce the forklift. Interestingly, one of the first buyers was Citroen, the French car company. 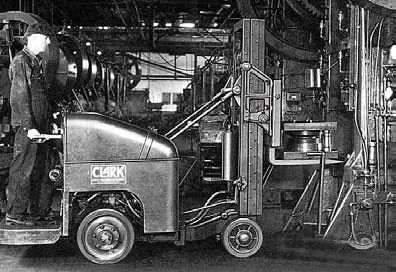 World War II provided a powerful impetus for the development of forklift production, mainly in the United States. The clear confirmation of this fact is that US Army used forklifts to transport lots of military supplies on board. The entire fleet of forklifts, which are very fast to unload, are needed here. Even on US Navy ships, forklifts are used to clean up debris from the deck and dump it into seawater. With the rapid increase of forklift production, the era of heavy manual labor is gone. It can be said that Clark has about 2000 forklift trucks off Clark’s production line every month. By comparison, there were only 50 to 75 vehicles before the war. During World War II, Clark provided 90% of the forklifts involved in the U.S. military economy. Yale and hyser were also able to increase production at that time.

In 1939, trailer transporters (in addition to this, conventional trolleys were used to transport long cargo)

After the war in 1945, the US Army not only left lots of forklifts in Europe. All US manufacturers have signed export equipment supply contracts and appointed their European distributors. In Europe, forklifts are really booming. Another positive technological achievement of the Second World War was the new concept of “transportation of goods and equipment”. BT industries (Sweden) carries goods on so-called Euro pallets (manual forklifts), plus new loading equipment, saving millions of man hours during the loading and unloading of ships, trains and freight trucks.

The so-called Marshall plan was crucial to the economic recovery of Europe, especially Germany. A large part of the US financial support program aims to rebuild the industrial production of forklift in Europe. West Germany’s economic recovery is surprisingly fast and is considered an economic miracle. JUNGHEINRICH, Linde, still and Steinbock in Germany have made the most successful use of this strategic advantage. (Steinbock was acquired by JUNGHEINRICH in 1994 and the brand disappeared in 2003).

90% of all forklifts associated with the U.S. economy during World War II was carloaders (Clark)

In 1959, Japan’s TCM (Toyota carrier Manufacturing Co., Ltd.) and Komatsu delivered the first batch of forklifts to Europe. Nissan’s forklift trucks began to be delivered in 1965, and Toyota began to deliver them in 1969. On the whole, it can be considered that the 1960s was the beginning of Europe’s “Asian forklift invasion”. At the same time, Japanese manufacturers compete with Europe, the United States, and some Eastern Europe manufacturers. First, their price is lower than European manufacturers. At first, their quality was slightly inferior, but then they reached the same level of competition as European forklifts. In addition, Japanese forklifts entered the European and American markets with additional equipments as a delivery standard. And their price is 35% cheaper than the market price.

In the 1980s, European factories counterattacked and restricted the import of forklifts from Asia and raising tariffs. Japan responded quickly, first of all, Toyota established its own forklift production plant in Europe (Anseni, France). Soon, other Japanese companies will follow suit: TCM (Bruges, Belgium), Mitshubish (Almel, the Netherlands), Nissan (Pamplona, Spain), Komatsu (first in Leighton Buzzard, UK), and then in Bari, Italy.

In the United States, forklifts were imported from Japan and then began to more and more in the 1970s. When Americans followed the example of Europe and restricted imports from Japan. Japanese companies also established their own production bases in the United States. Nissan forklift truck in Marlengo, Illinois, Toyota forklift in Indiana. Komatsu Forklift truck is located in La Mirada, California (near Los Angeles)

In 1976 (at the forefront of advanced technology), the first Komatsu remote-control forklift was launched

Over time, Asia’s boom coincides with many other problems for European manufacturers themselves. First of all, this is an energy crisis. In addition, these companies are increasingly affected by environmental factors, in which the public is increasingly aware of the need for environmental protection. Meanwhile, Industrial development is also facing the rapid growth of estate prices, which is caused by the lack of land.

Surprisingly, despite all of this. European manufacturers and the United States have not made any efforts, even some attempts to get some sales in Asia. Cultural differences and the remoteness of Asian markets partly explain this. Cultural differences in consumer attitudes toward technology in Europe and Asia also affected. Three years later, Asia cut off imports of used forklifts from Europe and began to invest in new cars. They think European forklifts are too expensive and have been used for too long. There is also a slight difference: in Asia, they prefer MT transmission, in Europe and the US, they prefer AT.

Since the late 1980s, the Daewoo, Hyundai and Samsung, the manufacturers of forklift from South Korea, have also opened their doors one after another. And then entered the world market, one of the most famous is Daewoo, which has good sales in the market.

Eastern European manufacturers also played a minor role in the world history of forklift development. Famous brands in Eastern Europe include VTA Kraft (formerly East Germany), DESTA (former Czechoslovakia), Lviv (Ukraine) and Balkancer (Bulgaria). Among the members on mutual economic assistance, including Cuba, Vietnam and Mongolia, these manufacturers are actually monopolists. But in other European countries, their products are hardly found, it’s hard to export to Western Europe. Because it must be revamped to a minimum quality level corresponding to the requirements of Eastern European customers. Another obstacle for Western importers is the long waiting time for forklift parts supply in Eastern Europe.

As a result, in the best selling year, BALKANCER produces 100,000 forklifts per year for the Eastern European market. After perestroika, the market was opened for Asian brands. At first, Eastern European users could not afford to buy new forklifts, so they had to buy used forklifts. While western companies integrating into Eastern Europe brought their own favorite forklift brands. In 2003, the sales level of BALKANCE dropped sharply.

We believe that some impressive figures need to be corrected. That is, Eastern European manufacturers have not played an important role in the global forklift history. In the end, we have to BALKANCER pays tribute to the concerns of forklifts. Because so far, even the top forklift manufacturers in the world such as Toyota and Linde couldn’t produce as many forklifts a year at that time. Moreover, if the Soviet Union and CMEA, the economic mutual aid committee led by the Soviet Union doesn’t break down. It’s difficult to say who will become the current world forklift market leader. 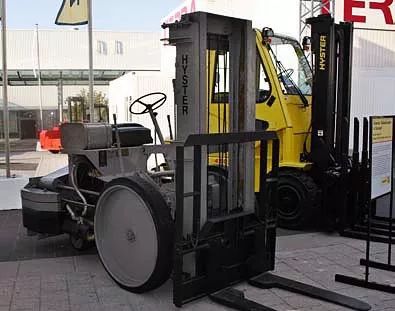 Hyter forklift reviews its history at this unusual exhibition at CeMAT 2005. Founded in 1936, CeMAT is one of the famous logistics exhibitions in Europe.

It’s hard to say when local companies will be able to restore enough forklift capacity. However, it should be noted that some manufacturers from Bulgaria are still developing rapidly. Including Dimex, Sparky, Herkulift and other companies.

Today, in the world market, economic integration makes small forklift truck manufacturers and large enterprises exchange stocks and acquisitions. Over the years, the top 10 leaders include Toyota, Linde, JUNGHEINRICH, NACCO industries, crown, Mitsubishi, Caterpillar, Komatsu, TCM, Nissan, NICHIYU. Another trend is that some or all of the production capacity has been transferred to the Asian countries (mainly China).

In China, almost all of the world’s major industrial vehicle manufacturers already have their own branches. Finally, the forklift has been improved not only in function but also in aesthetics. Competition among manufacturers is increasingly centered on forklift design, including customization, unique features, ergonomics and environmental protection.

We are from China, a group of people who do things seriously and serve customers.  Leave your email and let us contact you